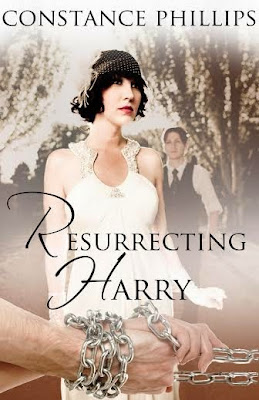 In order to save the only woman he’s every loved from self-destruction, Harry puts his afterlife on the line by entering a wager with purgatory’s keeper, Jaden. He gives Harry a younger face and body, and a new name: Erich Welch.


If he wants to keep his new life, he must convince Bess to give up the promise she made to Harry on his death bed and call off the séance she’s scheduled on the anniversary of his death.


Will Erich be able to help Bess over her loss and will any good come from resurrecting Harry?


“ This was a very fast read for me and kept me guessing to the very end. ” M. E. Wilson

“Theirs was a love story that Ms. Phillips delves into in her novel. ” R. Trogne

“Great story, new idea. All in all. Worth a read.” The Eternal Scribe

Resurrecting Harry was a 2013 Finalist in the Grave Tell Awards, Sugar Shack division. 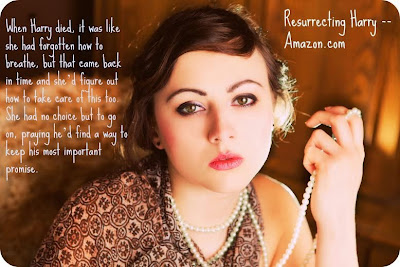 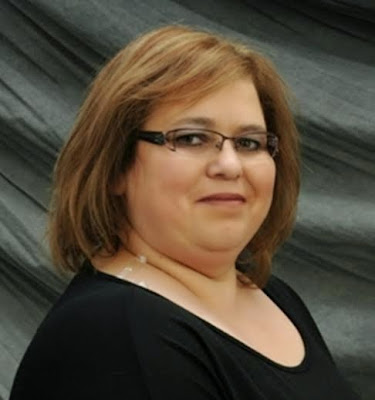 Posted by Unknown at 9:20 PM No comments:

Taken By a Trillionaire 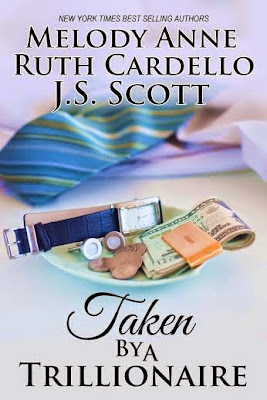 Posted by Unknown at 9:03 PM No comments:


Could this be the record for the worst name to give a child, Ayma Kuntz. Welcome to Ayma's world and the other Bayshore students as they contend with the drama, romance, and heat that fills their days.  Broken - Book One of the Assumption Series centers on Ayma and Colton. It follows them through the first half of their senior year in high school. A year when life should be exciting, fun and happy...but sadly, it isn’t always like that.


Ayma comes from wealthy divorced parents. Her mother has made her life a living hell from the time she was born and named. Her life has been planned and designed to make her a replica of her mother; a socialite living on Bay Shore. Ayma is trying to break that mold. She wants to be nothing like her mother, but really doesn’t know who or what she wants to be. She has her limited friends, but lots of nemeses, low on the social ladder, and a name that will haunt her forever.


Then along comes Colton, He’s who every girl wants or every guy wants to be like. Colton is the opposite of Ayma, he’s not rich, has a supportive family, tons of people who want to be his friend, but Colton feels he is damaged at best. He has a past, one that includes time in jail.


Ayma and Colton seem to balance each other out, they aren’t supposed to be together, they are complete opposites, yet the attraction is one they can’t fight for long... Will his past catch up and tear them apart or will they be able to pull through all the obstacles created to break them apart?


Broken is how both of them feel. Can they help each other fix the damaged pieces of their lives or will unforeseen circumstances keep their lives forever shattered? 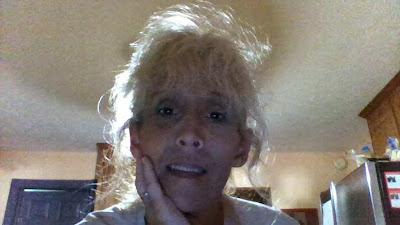 Izzibella Beau is an aspiring writer currently residing on a farm in South Carolina USA. She is married and has 31 children; 3 biological and 28 canine. She earned a bachelor and master degrees in criminal justice from Saint Leo University. She also has many graduate hours in the disciplines of teaching and public services. Ms. Beau in now part of the awesome authors of Beau Coup Publishing LLC. Broken: Book One of the Assumption Series is her first attempt at novel writing. To date, this particular series will have three books based on the lives of BayShore Academy high school students, Ayma and Colton. the series will continue though with each additional book focused on another dynamic character (s) from the series. Ms. Beau enjoys writing, reading, taking long walks, playing with all her children, and the Pittsburgh Steelers. She is an animal lover and will contribute a portion of her royalties from the Assumption Series to animal rescue and shelters nationwide. 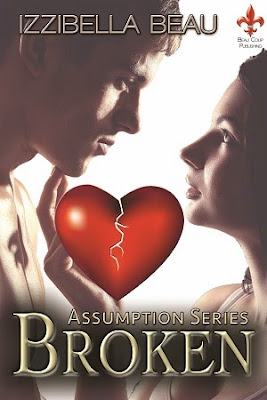 Some fun facts about the author***
1.) I am an exercise addict
2.) I support various animal and rescue groups
3.) I love to move around and cannot stay in one state or city for too long
4.) Most of my books have character names that come from a pet or someone who has impacted my life.
5.) Taylor Swift songs have brought a lot of creativity to my writing.
6.) My favorite food is chocolate
7.) I have been with my husband for almost twenty-five years.
8.) I love the Pittsburgh Steelers
9.) I have a Master Degree in Criminal Justice
10.) I worked as a security guard for concerts and NFL games in Tampa Florida (not that I was much of a threat since I am only five foot three and a little over one hundred pounds)
11.) I worked as an educator in an alternative school setting for those adolescents who’d been expelled from public middle and high schools.
12.) I am an author with Beau Coup Publishing.
13.) I currently have seven books out on Amazon for sale.
14.) I am working on a new series where not every ending will be a happily ever after. I also will be part or two books compilations this year with various authors.
15.) My children’s names appear in the When Separate Worlds Collide series
16.) I only like stuffed crust pizza from Pizza Hut, and then I only eat the crust and leave the rest of the slice.
17.) All three of my children were born prematurely, all are fine and healthy though.
18.) I have two older sisters.
19.) My niece, Carrie, is my closest family member.
20.) I was in the three largest bodies of water that touch the United States all in a month span, the Pacific Ocean, the Atlantic Ocean, and the Gulf of Mexico
Author Media Links
https://www.facebook.com/izzibella.beau?ref=hl
https://twitter.com/IzzibellaB
www.izzibellabeau.com

Posted by Unknown at 9:08 PM No comments: 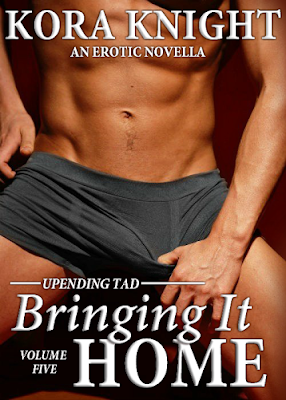 It’s Friday night and Tad finds himself doing pretty much what he’d expected. Celebrating with his friends at a night club in honor of their buddy Breck’s birthday. The music’s pumping, drinks are flowing, as laughter and dancing bodies abound.
Nothing too outlandish, nothing unusual.
Until Scott and his own crew show up at the place. Funny how the one person Tad prefers above all others is the last person he wants to see. But now that he’s spotted the guy across the room, he can’t seem to take his eyes off him. Which winds up being a very bad thing. Seems Scott out in public with other attractive men is a much different story than Tad’s used to.
As one disturbing event after another unfolds, Tad splits before he loses his mind. But the breather he needs he does not get. In fact, things just go from bad to worse, the night ending on a note he never would have imagined. As things between Scott and him hit rock bottom, the only direction left must be up. If only Tad’s life would follow such a formula. But the path he’s been walking lately has never been that simple.
With a world of revelations finally revealed, can Tad find it in himself to make peace with Scott’s past so they can finally head into the future 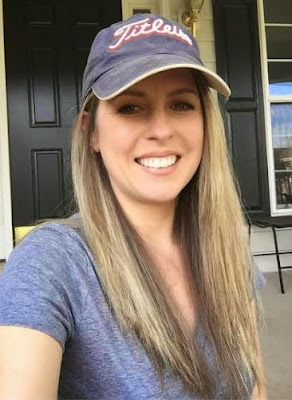 Born and raised in the Northern Virginia, Kora Knight has always loved to read, but it wasn't until her preteen years that she discovered her deep-seated love for writing. With published literary teachers and play writers in the family DNA, it really shouldn't have been a surprise.
But she also had a love for art.
So, bartending her way through college, she worked hard to earn a degree in Graphic Design. It was during this period of time that she met her husband. Together they've built their crazy life together, ushering in four equally crazy children to enjoy it with.
It was during her time as a stay-at-home-mom that she first became involved in social book forums, then from there tried her hand in literary role playing. Which, in turn, led to becoming a fervent online independent writer. Since then, she has endeavored to share with the world her impassioned stories of love, adventure and sensual wonderment, her most recent delight being that of m/m erotica.
Kora is currently working on the last installment of her m/m Up-Ending Tad series, as well as a handful of other projects, all romance, to be released as early as next year.
Media Links
Website: http://koraknight14.wix.com/author
Facebook Official Page: https://www.facebook.com/authorkoraknight
Personal FB account:  https://www.facebook.com/profile.php?id=100007901145290
Amazon Author Page: http://www.amazon.com/Kora-Knight/e/B00OBYLP8W/ref=ntt_athr_dp_pel_1
Goodreads:https://www.goodreads.com/author/show/8529860.Kora_Knight
Twitter: https://twitter.com/koraknight14
Pinterest: https://www.pinterest.com/valgirld/kora-knight/
Google+: https://plus.google.com/u/0/117558623135317111788/posts

Posted by Unknown at 9:08 PM No comments: 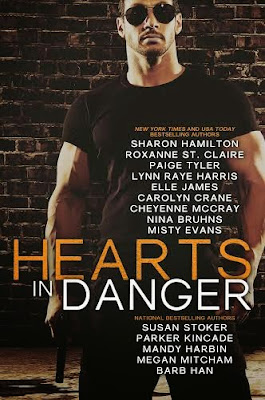 Hearts in Danger, FOURTEEN stories of thrilling romance to benefit the American Heart Association. This limited time box set is only $0.99 (AWESOME value), but we will be rewarding those who purchase the set via PRE-ORDER and through the first week it’s live! Just fill out the form to claim your freebies as our thanks for supporting the cause.

This limited time box set is only $0.99 (AWESOME value), but we will be rewarding those who purchase the set via PRE-ORDER and through the first week it’s live! Just fill out the form on the left to claim your freebies as our thanks for supporting the cause. We are still gathering the bonus information and will update a partial list within the coming weeks. 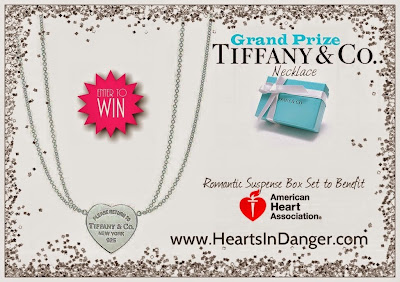 Caught in the Crosshair

Enemy Mine (The Base Branch Series Book 1)

Pick Your Poison (The Bullet Catchers)

Against the Dark (Undercover Associates Book 1) 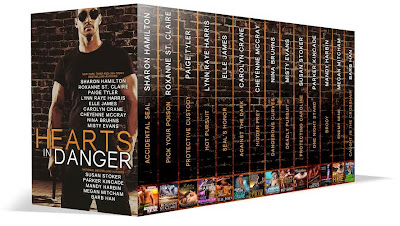 Posted by Unknown at 6:11 AM No comments: