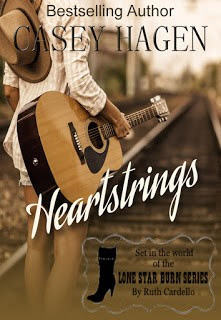 Ryan Ward is desperate to escape her soul-sucking life. Between catering to the work demands of her ambitious father, a popular Washington senator, and extricating herself from her abusive ex-boyfriend, Ryan yearns for the life of which she once dreamed: that of a country singer/songwriter. But how does one of Washington’s elite shed the slimy skin of politics for cowboy boots and a Taylor six-string? And can she do it incognito?

Slade McCall traded money for passion when he left his high six-figure income for a Texas ranch to indulge in his love of the land and, more importantly, his autistic young daughter. With an intractable ex-wife and ranch demands beating him down, the last thing Slade needs in his life is a troubled woman with a fading black eye, the voice of an angel, and a dubious past. But when need outweighs common sense, he hires the would-be country singer for a short stint of housework at the ranch.

Ryan and Slade know tangling their hearts is a bad idea—she has a past to escape and a dream to pursue, and he has a ranch to build and a daughter to protect. But they can’t deny their desires or their hearts, and as their love strengthens it is put to the test. Someone is intent on physical harm, and Slade’s ex is determined to reconcile. Will the pressures destroy what Ryan and Slade have started to build? Or will they follow the sounds . . . of their Heartstrings . . .

Taken by Surprise by Desiree Holt 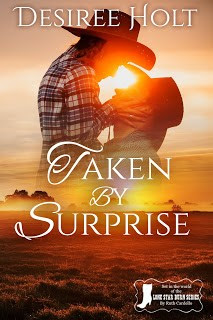 Jessie Coford had a dream: work hard, save her money, open her own restaurant, get married. In short order her dreams disintegrated. She broke up with the man she’d fallen in love with, she lost her job, and her landlord gave her sixty days to move. She was left with empty dreams and a woefully small bank account. What’s a woman to do?

Jack Ward thought his life was on track: he was a detective in the Houston Police Department and he’d met the woman of his dreams. Then Fate dealt him two low blows: his woman broke up with him and he was wounded in a takedown. What’s a man to do.

When Jessie headed to Fort Mavis to claim the restaurant left to her by an unknown relative, the last person she expects to see is Jack now working as a sheriff’s deputy. The first time they see each other, shock waves shook the town. Could he get past the bitterness of the breakup? Could she realize sometimes goals have to change…for the better? It takes a near disaster for them to find the answer to that question.

Love on Tap by Judy Kentrus 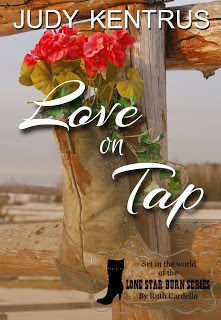 Grayson Wolff was currently enjoying the success of the microbreweries he’d added to his family’s chain of roadhouses. Working and taking care of his nine-year-old nephew didn’t leave time in his life for a woman. That all changes when Malibu Barbie comes into the western style bar and orders a Pina Colada, with extra fruit.  With her California tan and white shorts she sticks out like a rose among a field of cacti.  He didn’t do one-night stands, plus he had too much going on in his life to get involved with a blond-haired bimbo. Causing a scandal was the last thing he needed. He was so close to achieving his personal goal, and no woman was going to mess it up.

Jennie Reynolds took this little vacation before she starts her new job.  Driving a U-Haul cross country was a challenge and she’d never received so many middle finger insults in her life. A hot dog motorcycle driver cut her off and she missed her exit. Now she was at some honky-tonk bar in the middle of Fort Mavis, Texas.  She was tired and annoyed, but the guy sitting next to her met numbers one through five on her, a-guy-must-have list: Long black hair, stone-gray eyes, tall, lean muscular body, and he was close to her age. Too bad she couldn’t stick around long enough for numbers six, seven and eight, great in bed. 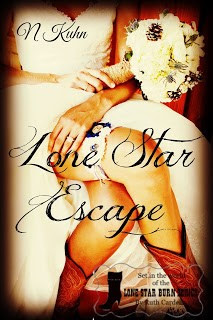 Mara is in hiding. She has to testify against some dangerous men from her past, who the Feds have lost track of.
Beau is a PI who enjoys his quiet life. Until the sexy woman that moves in next door stirs things up unintentionally.
Can Beau keep Mara safe or does he put her in more danger than she already was in? 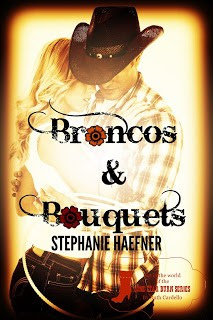 Laney Parker needs a fresh start and Fort Mavis seems like the perfect place to do it. She’s determined to work hard and make up for her mistakes, vowing not to repeat them. Easier said than done. How’s a girl supposed to concentrate when a hot cowboy keeps rescuing her and pestering her for a date?

Sawyer Williamson is damn good at taming wild horses, but apparently he’s far less competent when it comes to wooing the fairer sex. Or maybe it’s just Laney. He’s never felt this way about a woman before and he’s afraid he’ll screw it up. Or that his past will screw it up for him.

Both Laney and Sawyer have parts of their lives they’d rather not share, but nothing stays hidden forever. Can they prevent the past from interfering with their present?