Fated Love
by Susan Boles
Genre: Romantic Suspense with a bit of Paranormal 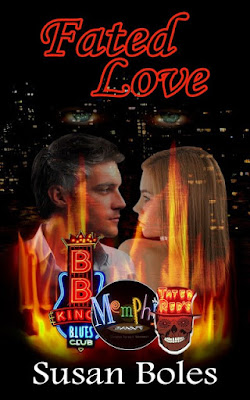 Sarah Cameron’s life changes forever the night her art gallery burns to the ground under suspicious circumstances.  Fighting her devastation, she’s picking up the pieces and trying to understand what happened with the help of arson investigator, Jake Riordan – who’s far too attractive for her to concentrate.
Then the stalking incidents begin. Who could want her dead? And is it tied to the fire at the gallery?
Jake is convinced he knows who’s responsible for the fire. But is he too close to Sarah to see the truth? After he’s pulled off the case for being too personally involved, Jake convinces Sarah to travel to New Orleans with him to escape the stalker and investigate some mysteries from his own past.
In New Orleans, a diary and a set of old pictures reveal long hidden secrets that are coming home to roost.
Till Death Do Us Part, just got a whole new meaning. 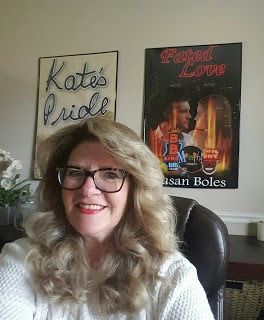 Susan calls McNairy County, TN her home ground even though she has moved away. It was here, at Bethel Springs Junior High School that she began her writing career with two friends. They formed their own little writers group that was so secret they were the only ones who knew it existed. She still has some of the stories they wrote carefully preserved in a loose leaf binder and tucked away for safety.
She has worked in retail management, briefly for the Census Bureau and for many years in the investment/insurance industry in the regulatory compliance arena. All of which are left brain activities. So she exercises her right brain activity with reading and writing…just to keep both sides even.
Reading has been a passion since she was very young. As a toddler, her mother read to her from her 'baby books' and her Mother tells a story about her holding one of them upside down and 'reading' by repeating the story verbatim from memory.
Susan is a multi-genre hybrid author. Her first novel, Kate's Pride, is a historical women's fiction set in West Tennessee in the aftermath of the Civil War. The novel is loosely based on her own Great Grandmother and published under the pen name Renee Russell.
Her second novel, Fated Love, is a contemporary paranormal romantic suspense (with a twist of paranormal) set in Memphis, TN.
Life got in the way of writing for many years but now she's come back to her early love.