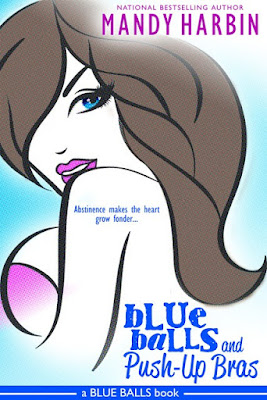 I know what you’re thinking. What the hell is this, and has Mandy lost her mind? Well, lucidity arguments aside, this is a series of women and men being in luv, but for whatever reason, can’t get a little some-some. Reasons will vary, but the theme is the same. It was time for me to have a little fun, and if you don’t know by now, I like to go big, or go home. So here’s my ballsy (pun totally intended) series.
Reader advisory: This book is part of a series that takes a fun look at life. You must be comfortable with the f-bomb and reading sex scenes because there is sex...eventually.

Blue Balls and Push-Up Bras (book one):
Sex would be nice. But after giving birth, Sophie is a little self-conscious about her body, and her husband, Sawyer, hasn’t even tried coming on to her. What’s a girl to do? Don’t blab to your friends, that’s what! Their reaction is a mix of shock and pity, but they unite under one common goal: to get her laid. In one week, she’s going to show Sawyer just what he’s been neglecting. At her reluctance, the girls all agree to break out their push-up bras for a night of showing off their assets in support of her mission.
But Sophie wants it now. The talk with her friends sparks her to be the initiator, but when she tries turning on the charm, Sawyer still doesn’t give up the goods. Now the only big O she’s getting is offended.
So she hatches a little plan of her own... 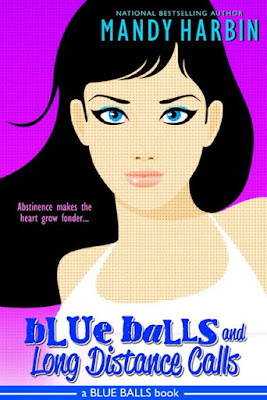 Blue Balls and Long Distance Calls (Book two):
Life and love are not always mutually exclusive, but power couple Morgan and Cooper seem to have it all, including high-end jobs, and hot, hot sex. With no need to get married, they livea happy lifeas a live-in couple.
But looks are almost always deceiving. With demanding careers taking more and more of their time awayfrom each other, Morgan has her doubts about where their relationship is going. She decides to have a littlefun with Cooper on his next business trip, knowing their crossroads might not keep them on the same path.
But she never anticipates getting the shock of her life... 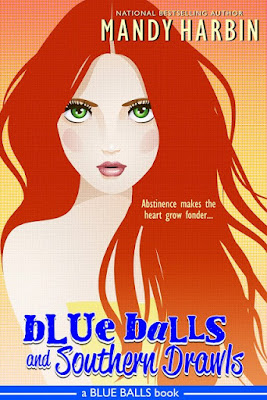 Blue Balls and Southern Drawls:
Taylor Berry is the quintessential city girl who can read through someone’s B.S. without batting an eyelash. Her no nonsense attitude is one her great friends and awesome boyfriend love. When he asks her to go with him to his parents’ house for the weekend, she’s not sure what to expect, but hey, it’s a few days and nights with the man she loves. What could go wrong with that?
Bryson Reed is a country boy who always looks forward to going back home to Texas for his family’s big annual reunion. A weekend of cookouts, fishing, and swimming. What could be better? In fact, this year he’s taking his girlfriend, Taylor, to introduce her to his family and join in on the fun. But the perfect weekend he’d envision starts to fall apart right after they arrive. When his mom puts Taylor in the guestroom … not in his old bedroom with him.
Taylor is shocked at the sleeping arrangements, but gets furious when Bryson doesn’t insist on them sleeping together. He thinks his mom is old fashioned and doesn’t see the problem while Taylor wonders where the line is between gentleman and momma’s boy.
Even though Taylor is mad at Bryson for how he handles the situation, she thinks his mom is up to something, and as the weekend progresses, she knows she’s right. This weekend of sweet tea and feigned southern hospitality cannot end fast enough.
But when the truth comes out and secrets revealed, something else might come to an end as well.